What Does An Alternator Do?

You may think the battery is the source of automotive energy, but that’s only half true. Your battery is essential for cranking your engine to start, but the other piece to the puzzle is the alternator. It keeps your car supplied with electrical energy when the engine is running.

So, how does it all work?

So there’s the answer to “what is an alternator?” Still confused? You can always call the technicians at Jiffy Lube® with questions. They’re trained and ready to answer questions about what does an alternator do.

Modern alternators have long lives and typically last the lifetime of your vehicle, but unfortunately failure can occur. Here are a few reasons why:

What Can Happen When The Alternator Isn’t Operating Properly?

Although a dead battery can be a sign that your alternator is malfunctioning, sometimes it is just the battery, and your alternator may not necessarily be the issue. This can happen when your battery has reached the end of its useful life or if you leave the headlights on all night, etc.

Is It The Battery Or The Alternator? Here’s How To Find Out.

Jumpstarting
First, try jumpstarting your car. If your car stays running, your battery may need to be replaced, but if your car dies again shortly after, it may mean that the alternator isn't providing enough current/voltage to the battery.

Many late model vehicles are equipped with a priority list of equipment programmed into their control modules that determines where to cut power first if the alternator isn't supplying enough electricity. That way, if the alternator fails, power to your radio (or other nonessential accessories) will be cut before losing power to your headlights.

Trouble cranking or frequent stalling
Like we noted earlier, trouble cranking the engine may mean that your alternator is failing to charge the battery. When attempting to crank the engine, all you’ll hear is a clicking sound. If the engine frequently stalls out while driving, it may be a sign that the ignition system isn’t getting enough power from the alternator to keep the engine running.

Unusual noises coming from the alternator
Cars make a lot of sounds, and most are harmless, but others can indicate serious mechanical problems. With a defective alternator, you'll often hear growling, squealing, or whining under the hood. Squealing can happen when the belt that drives the alternator's pulley becomes misaligned or loose. Growling or whining can mean the bearings that support the rotor shaft are defective.

A seized alternator pulley bearing will also cause the drive belt to emit a burning rubber smell as it rubs the seized pulley when the engine is running. This can happen if the alternator is being overworked or has frayed or damaged wires. An overworked alternator produces a higher-than-normal current flow, which can cause wiring to heat up unsafely.

The battery light will also appear if the alternator is exceeding its voltage limit (>14.5 volts). Depending on the electrical load, the battery/charging system warning light may flicker on and off as system voltage fluctuates in and out of its intended range.

What Happens When You Bring Your Car To Jiffy Lube®?

Stop by any of the 2,000+ locations nationwide and a Jiffy Lube technician will test your alternator by checking its charging level, the battery strength and charge, and resting voltage. Rest assured Jiffy Lube follows OEM recommendations and processes in accordance with the manufacturer’s warranty. We’ve got you covered, so you’ll be charged up and back on the road in no time. 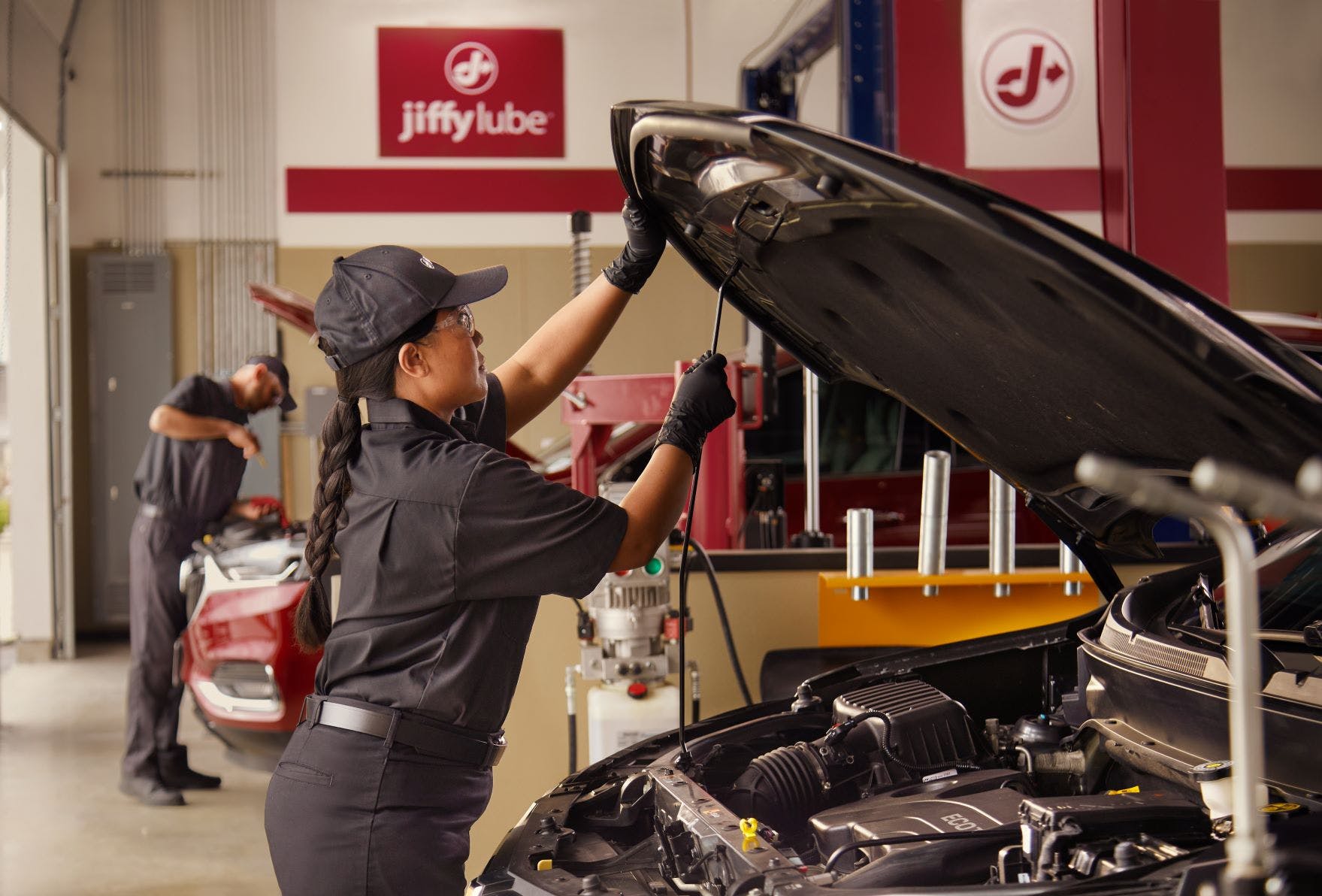 Read More About It.

Now that you can answer “What does an alternator do?”, learn more about your check engine light here.

Please note: Not all services are offered at each Jiffy Lube location. Please check with your local Jiffy Lube service center or visit jiffylube.com for specific services offered.